Many of us look back on our childhoods with fond memories of running through a park, playing hide-and-seek or competing in sports day.

But a study suggests our activity levels begin to plummet at just seven years old.

Children become lazier when they start school, regardless of whether they were active to start off with, the research found.

And our teenage years are when we are most likely to drop a sport we used to enjoy.

Researchers from Finland are now calling for more sports clubs to ‘promote an active lifestyle for all children’. 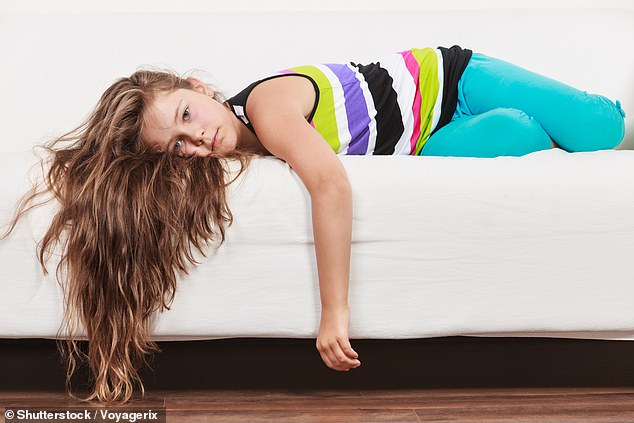 We start to get lazy at just seven years old, a study suggests (stock)

The research was carried out by the University of Jyväskylä and LIKES Research Centre for Physical Activity and Health.

It was led by Irinja Lounassalo, a PhD student in the faculty of sport and health sciences at the university.

‘Since physical activity behavior stabilises with age and inactivity is more persistent behavior than activity, interventions should be targeted at children early in life before their habits become stable,’ Ms Lounassalo said.

‘Additionally, supporting schools and sport clubs is crucial for promoting an active lifestyle for all children.

‘Since parents may have an effect on activating their children, parents would need support for finding ways to do that.

‘Building publically available sport facilities and safe bicycling and walkways might help in increasing opportunities for being active regardless of age, nationality, gender or educational level.’

The NHS recommends children aged five-to-18 complete at least an hours’ worth of physical activity a day, which may include cycling, running or playing tennis.

And they should take part in activities that strengthen their muscles and bones, such as hopping or skipping, three days a week.

The NHS also advises adults do at least 150 minutes of moderate activity a week and strengthening activities on two or more days.

But up to four-fifths of teenagers and one-third of adults fail to meet these recommendations, the authors wrote in the journal BMC Public Health.

Teenagers aged 13-to-14 feel significantly less motivated to exercise when wearing the activity-tracking wrist device, according to a study by the universities of Brunel and Birmingham.

And these features create peer-pressure, as well as causing feelings of guilt and negativity, the study found.

Of those who do exercise wearing a FitBit, they do not find such activities ‘fun’, the research adds.

To uncover how our activity levels change as we get older, the researchers analysed 27 studies published between 2004 and 2018 that assessed how different age groups exercise.

Results revealed an ‘exceptionally high’ decline in activity among children and teenagers.

Exercise begins to slump among youngsters when they start school, regardless of whether they were highly, moderately or barely active to begin with.

It is worth noting, however, different studies reported varying outcomes.

For example, those that had people self-report their activity levels found exercise starts to decline at age ten.

The scientists also discovered children whose parents support them exercising are less likely to become inactive.

And those who spend little time watching TV are more likely to stay fit.

The researchers stress being active as a child has its benefits in later life, even if we then become sedentary.

‘Despite the common declining tendency of physical activity throughout the life course, being physically active in childhood and adolescence may be of high importance,’ Ms Lounassalo said.

‘It can postpone the time of becoming inactive later on.’

However, previous studies suggest there are ‘pockets’ of people who exercise more as they get older.

This is more likely to occur among those who quit smoking or are free of disease.

The study review found white men with ‘higher socioeconomic status’ are most associated with ‘persistent activity’.

‘In the future, special attention should be paid to these individuals who increase their physical activity, because it is important to understand how potential lifelong inactivity could be turned into activity,’ Ms Lounassalo said.

Hair loss treatment: What are the best supplements to help with the condition? Expert disc