Britons book more GP appointments when it is cold and rainy – but they make fewer visits when it is sunny or snowing, research shows.

Spikes in attendances also occur after public holidays and major health stories in the media, particularly about cancer.

The study comes amid record long waiting times for appointments, with the average patient in England going two weeks before they are seen.

Clarendon Lodge Medical Practice in Leamington Spa, which conducted the study, used its data to manage rotas around busy periods.

The practice has reduced its locum costs by more than £25,000 in one year, over the period of September 2018 to August last year. 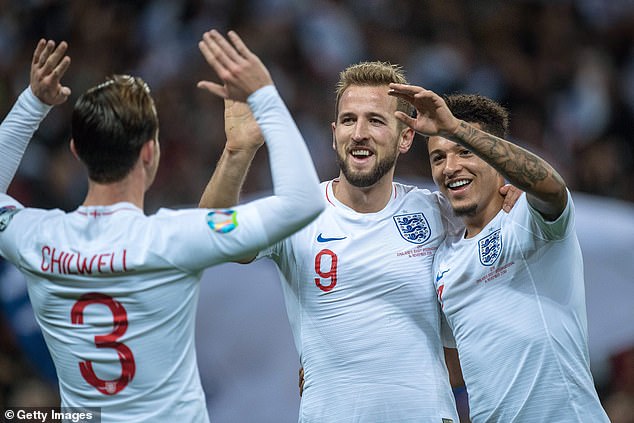 Demand for GP appointments dropped by 16 per cent when England were playing in the World Cup in 2018. Pictured, Harry Kane, Ben Chilwell and Jadon Sancho during the UEFA Euro 2020 qualifier on November 14

The study used admissions figures from Clarendon Lodge between September 2017 and the same month the following year.

The surgery, which has around 13,500 patients, reported that 44,885 appointments were booked during the study period – an average of 180 per day.

But on the days of World Cup football matches, there was a significant decrease in demand. Appointments fell by five per cent on days when England was not playing, and 16 per cent when it was.

This suggested people ‘will prioritise watching the football game over arranging a GP appointment’, the researchers said.

No such link was found for events such as the Tour de France or international cricket.

Snowy weather saw a 16 per cent reduction in demand, which the authors suggest may have been due to difficulties in reaching the surgery.

‘And often that’s the case, in a lot of GP surgeries, they have got the same team managing a very different workload day to day, and that leads to the problems we are having with recruitment.’

Dr Al-Zubaidi said the data allows the surgery to predict days that are busier, call in more locums, and prevent strain on staff.

It also helps them avoid calling in locums when they think it will potentially be busy only for it to be a waste because they are not needed.

‘So we are trying to prevent waste essentially,’ Dr Al-Zubaidi said.

On days cancer stories were published, uptake increased by nine per cent.

The doctors wrote: ‘Articles relating to cancer, in particular, showed marked spikes in patient appointment demand, potentially highlighting specific symptoms that the patient was either unaware of or overlooking.

‘Furthermore, they often discuss cases where the cancer was missed or mistreated and often request the patient to contact their GP if they had any concerns, which may have contributed to the increased demand observed.’

The practice is now using the data to predict when demand for services is likely to peak or when quieter days are likely. 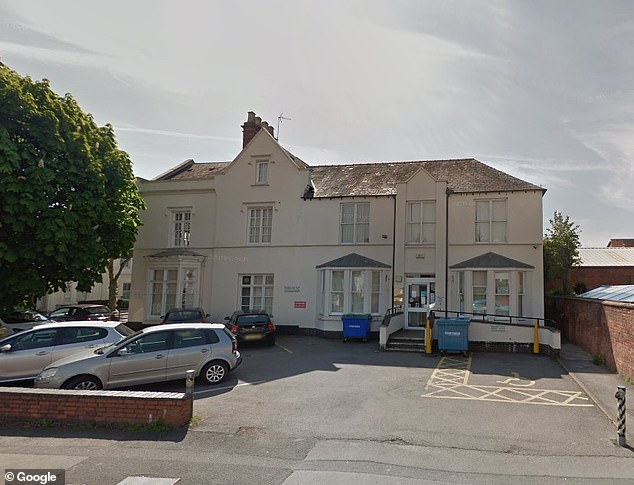 Clarendon Lodge Medical Practice in Leamington Spa (pictured), which conducted the study, used its data to manage rotas around busy periods. The practice has reduced its locum costs by more than £25,000 in one year, over the period of September 2018 to August last year

Clarendon Lodge Medical Practice is one of five to ten per cent of practices that are part of the GP Direct scheme.

It sees patients given same-day telephone consultations followed by appointments in person if necessary later that day, rather than pre-booked slots.

Previous international research has shown a link between external events and emergency department admissions but the link to primary care demand had not been explored.

The authors said: ‘Although forecasting tools based on weather projections are being utilised to manage health on a national level, there is currently little to no exposure on a local level.

‘With the ever-increasing threat of climate change, understanding how weather impacts patient demand will be crucial to prepare primary care for the future.’

Professor Martin Marshall, chairman of the Royal College of GPs (RCGPs), said predicting demand on any given day may be difficult.

He said: ‘Understanding trends in demand is vital in order to plan when and where resources are needed most, not just in general practice but right across the NHS, but they are not always easy to predict.

‘Sporting events, for example, are infrequent and as this research shows can have a variable impact – and realistically, GPs can only ever really plan for the impact of news stories after they are in the public domain. But even the weather is becoming more unpredictable.’

He added: ‘Reliable forecasting tools would be useful – and it’s interesting to see how this practice is taking this forward – but traditionally, we haven’t had the same access to accurate data as secondary care colleagues, which has made planning difficult.’

GP surgeries are facing an unprecedented demand for appointments due to the growing and ageing population as well as the impact of obesity-driven diseases such as type 2 diabetes.

At the same time, staff numbers have dwindled. The number of fully qualified full-time family doctors has plummeted by six per cent in four years.

Surgeries are increasingly using tactics to reduce the number of patients coming through the door, such as quizzing patients about their illnesses on the phone to decide whether they are sick enough to see a doctor.

The Daily Mail commissioned a survey of 974 GPs and practice managers in December and found 59 per cent currently use triage schemes. Many have introduced them within the last two years.

Average waiting times to see a GP have breached two weeks for the first time on record in August, a poll of GPs revealed.

The average wait for a routine GP appointment in England has increased by two days in the past two years to 14.8 days.

WHAT PRESSURES ARE THE NHS FACING?

This is predicted to reach 70,000 by 2024 at the current rate, according to a major joint report in March by the King’s Fund, Nuffield Trust and Health Foundation.

A Royal College of Nursing poll, of 1,692 Britons, found 71 per cent think there are not enough nurses to provide safe care to patients.

Of 1,408 people polled in England, 37 per cent said their top priority for any extra NHS funding was the recruitment of more nurses.

One in six of the UK population is aged 65 and over, and by 2050 it will be one in four, according to NHS England.

This group of people are at the highest risk of adverse outcomes such as falls, disability, admission to hospital, or the need for long-term care.

The King’s Fund reports that over 15million people in the UK have a chronic condition, many of whom will be elderly.

The number of patients aged 75 or over needing an NHS operation in England has doubled since 1999, a study by Queen Mary University found.

A record 4.4million people are waiting to go into hospital in England for a planned procedure, according to NHS England.

In comparison, a year ago there were 4.09million people on the list, and two years earlier it was 3.81million.

A&E departments are also feeling the strain as backed-up hospital beds make it harder for them to find places to put new patients, so leave them waiting on temporary beds known as ‘trolleys’.

NHS England revealed in July that the number of A&E patients stuck on trolleys waiting for an inpatient bed has increased by 70 per cent in a year.

The figure is almost treble that from four years ago.

Over the last six years, 585 practices have closed, covering a population of nearly 1.9million, according to data obtained by Pulse magazine

Experts believe the rate of surgery closures is accelerating because rising numbers of under-pressure doctors are opting for early retirement – or deciding to abandon their careers.

Almost as many family doctors left the health service between June 2018 and June 2019 as did in the entire three years to March, according to NHS figures.

On top of this, a poll in February found 42 per cent of NHS GPs said they intended to leave or retire within five years, up from less than a third (32 per cent) in 2014.

The research by the University of Warwick found almost a fifth (18 per cent) said they would leave within two years.

Data from winter 2018/2019 reveals the NHS once again under intense pressure over the winter months.

Total attendances at A&E rose to 6.2million last winter – a six per cent increase from the year before. Just over 85 per cent of patients were admitted, transferred or discharged within four hours – the second worst performance on record.

The average bed occupancy rate last winter remained very high, at 93.5 per cent, comparable to the previous year’s figure of 94.4 per cent.

NHS bosses have been urged to step up anti-flu preparations earlier this year after a stark rise in the number of virus cases during winter in Australia.

Top British doctors said the increase in Australia could be a sign of what is to come in the UK this winter.

Despite the looming winter months, figures suggest the NHS is now in a year-long crisis.

Anti-anxiety diet: Which foods can help to combat anxiety?