The wife of a cancer patient who was left unable to have sex and incontinent after losing most of his penis to a flesh-eating superbug following routine surgery has revealed their relationship is ‘stronger than ever.’

He and his wife Sue, 61, were handed a a six-figure payout over the hospital’s failings, they have lost their sex life and Andrew has been to hell and back.

Despite this, Sue – who married Andrew just months after he returned from hospital – has insisted, ‘Sex life or not, our relationship is stronger than ever.’

Sue, speaking to Take a Break magazine, said that after Andrew lost most of his penis, he told her that he felt like ‘less of a man’.

But Sue ‘loved him more than ever,’ and said. ‘I tried to help him see that sex wasn’t the most important thing in a loving marriage, and that I would stand by him no matter what.’ 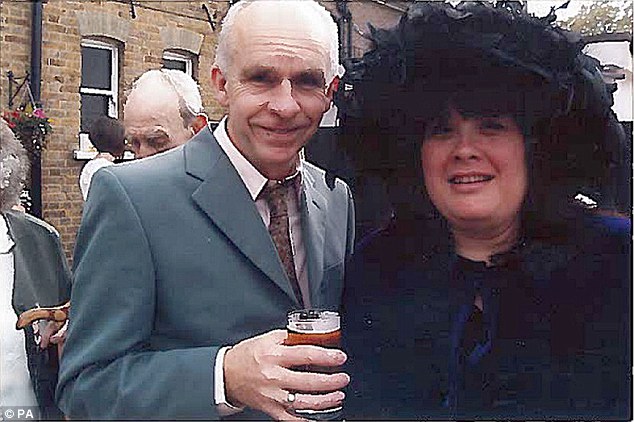 Andrew Lane (left) has been left with just an inch-and-a-half of his penis after a contracting a devastating flesh-eating superbug. He’s pictured here with his wife Sue (right)

Recounting the dark days nearly seven years ago, Sue said that the gory details of Andrew’s struggles ‘sounded like something from a horror film.’

She recalled doctors telling her that they’d need to cut away her husband’s infected flesh that spread from his stomach area down around his groin.

The horrifying saga started when he was diagnosed with prostate cancer and decided to have an operation to have it removed, thinking that this was the most direct solution.

His bowel was punctured during the procedure, but staff at Southend Hospital in Essex only noticed the injury six days later.

Mr Lane was rushed to theatre, but the damage caused by the infection was so severe that he was left with just an inch-and-a-half of his penis.

He was also forced to have the contaminated tissue covering his stomach removed, which he said has left him looking ‘nine months pregnant’.

‘When the doctor told me I gasped. “Excuse me?” I said. I felt horrified and heart-broken for Andy. I know how deeply a loss like this would affect any man.’

The loving wife added that Andy was ‘so dosed up on painkillers that he didn’t understand.’ 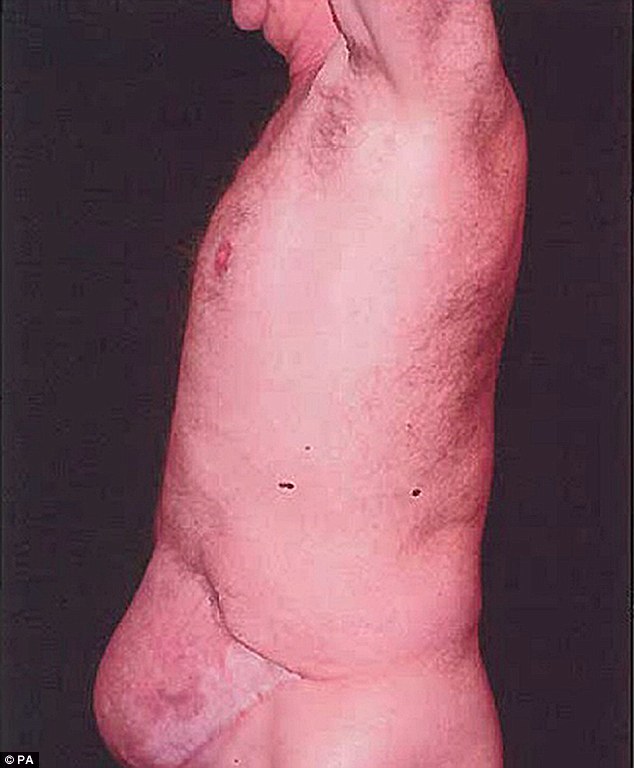 When he eventually came around, Sue revealed that he was in a floods of tears and shouted at her to go away.

Seeing him so distraught was awful, but later he was more lucid and told her he didn’t really want her to leave, with Sue reassuring him that she wasn’t going anywhere.

Sue stayed by her husband’s bedside and a few days later, he shocked her by proposing.

Andy spent the next eight weeks in hospital and, upon returning home to South Ockendon, the couple kept their pledge and married a few months later.

Sue described it as ‘a wonderful day’ but added that her once sporty and active husband was struggling with the consequences of a taxing illness.

Andy had been fitted with a catheter and a colostomy bag, meaning football and golf, two loves of his, were a no go.

He also lost the physical side of their once ‘healthy’ love life and Sue could tell he was struggling mentally despite a brave face.

‘I feel less of a man,’ he told Sue – who reassured him she loved him ‘more than ever’. But he fell into depression nonetheless.

Sue, a carer, realised he needed something to focus his mind on, so she brought him to work and he started to look after people with learning difficulties and challenging behaviour, something Sue said did him ‘the world of good’.

While they tried to make the best of life, Southend University Hospital NHS Foundation Trust admitted there was a delay in diagnosing Andrew’s condition and the case was settled in July 2018 for an undisclosed sum, Slater and Gordon said.

He was left fighting for his life at Southend Hospital, Essex, but managed to pull through and survive. He then took legal action against Southend University Hospital NHS Foundation

Andrew said at the time: ‘They’ve admitted their mistake, but I’ve not had an apology and knowing that just a scan a few days earlier would have prevented all of this is very difficult to accept.

‘I’ve been compensated, but I’ll never get my health back and I just want other people to be aware of how dangerous this flesh-eating bug is.

‘If you don’t feel you are getting the right treatment, you have got to speak out.’

Andrew’s losses have been vast. He can no longer have sex, is incontinent and has been treated for depression following the life-changing operation.

‘My wife Sue and I have been together for 18 years and enjoyed a healthy sex life, but since this happened that has been impossible,’ he said.

What is necrotising fasciitis?

The condition is a rare but serious bacterial infection that affects the tissue beneath the skin and the surrounding muscles and organs.

It can start from a relatively minor injury, such as a small cut, but gets worse very quickly and can be life threatening if it is not recognised and treated early on.

Despite sometimes being called the flesh-eating disease the bacteria that cause it don’t eat flesh – they release toxins that damage nearby tissue.

How can you get it?

Necrotising fasciitis can be caused by several different types of bacteria.

The bacteria that cause the infection live in the gut, in the throat, or on the skin of some people, where they don’t usually cause any serious problems.

But in rare cases, they can cause necrotising fasciitis if they get into deep tissue – either through the bloodstream, or an injury or wound.

In instances such as:

What are the symptoms?

These can develop very quickly over a matter of hours or days and can originally feel very similar to flu.

After a few hours, the symptoms will become more severe such as:

How is it treated?

The condition must be treated in hospital, and the main ones include:

How bad is it?

Necrotising fasciitis can progress very quickly and lead to serious problems such as blood poisoning (sepsis) and organ failure.

Even with treatment, it’s estimated that 1 or 2 in every 5 cases are fatal.

People who survive the infection are sometimes left with long-term disability as a result of amputation or the removal of a lot of infected tissue.

‘The desire is still there, but the little that’s left just doesn’t function anymore.

‘It’s been a difficult thing to come to terms with for both of us. I know Sue still loves me, but I do feel less of a man.’

Mr Lane, who still works as a carer, added: ‘Because I have no muscle tissue my intestines just hang out and I look like I’m nine months pregnant.

‘I’m at greater risk of hernias and I have two so I’m in constant pain. I used to be sporty and proud of my body, but now I can’t bear to look in the mirror.’