Would YOU pay a Covid-19 surcharge at a restaurant?

British food critics have stirred debate online after it was revealed US restaurants are  adding a ‘Covid-19 surcharge’ to bills.

Vanilla Black, a vegetarian restaurant in central London, shared a picture of a bill from the Kiko Japanese Steakhouse and Sushi Lounge in White Plains, Missouri.

Owner Andrew Dargue shared an image of a receipt that had an extra $2.19 – five per cent of the $43.85 total – added to it, saying: ‘I’m sure people will embrace this with open arms….’

The now viral photo was then shared by Sunday Times Restaurant Critic Marina O’Loughlin, who said she would happily pay a surcharge to help keep restaurants afloat.

And writer and producer Tracy King agreed, saying she’s been asking local businesses to c’harge me for an extra takeaway coffee but not give me the coffee’, and suggested a ‘covid donation’ on food ordering apps such as JustEat. 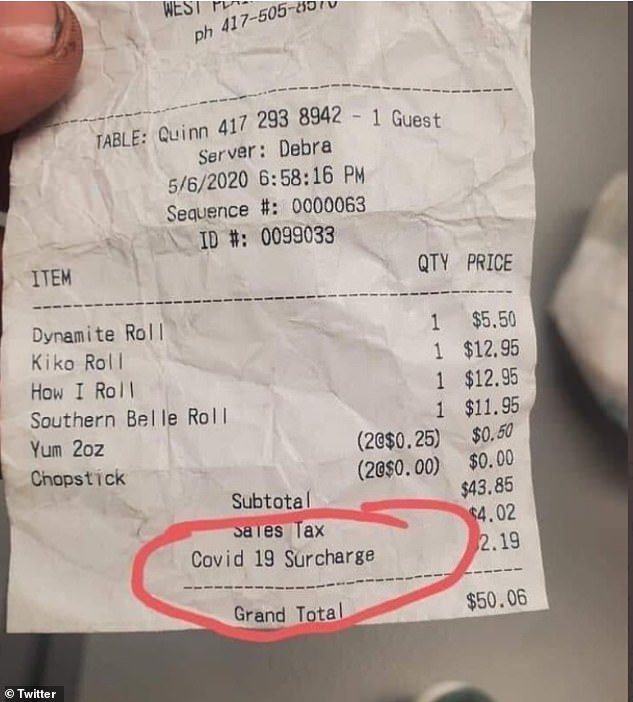 Vanilla Black, a vegetarian restaurant in central London, shared a picture of a bill from the Kiko Japanese Steakhouse and Sushi Lounge in White Plains, Missouri. 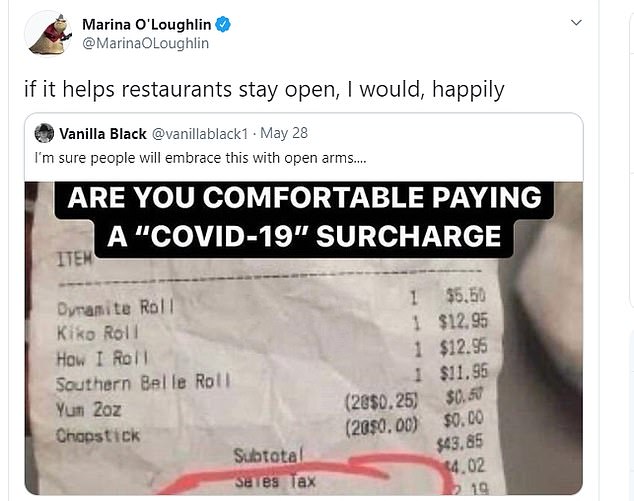 The now viral photo was then shared by Sunday Times Restaurant Critic Marina O’Loughlin , who said she would happily pay a surcharge to help keep restaurants a float

But others have disparaged the idea, saying it’s extortionate and will only line the pockets of rich restaurant owners.

In the US, restaurants have been adding a five to 26 per cent surcharge on bills, calling it the Covid-19 charge.

After a receipt from Kiko’s Japanese Steakhouse & Sushi Lounge went viral, the eatery wrote on Facebook: ‘Please understand we are not doing this to take advantage of you guys.

‘We are doing this hoping we can adjust the surcharge weekly rather than just raise all of our prices on our menu due to increase prices from our supplier on meat, poultry, seafood and produce.

‘Almost all of us here getting our supply through the same supplier. So why are we the one that being harassed??!! Stop calling names to my employees!! They are just working there, go ask the meat packer not us!! We are just buying it from them!! 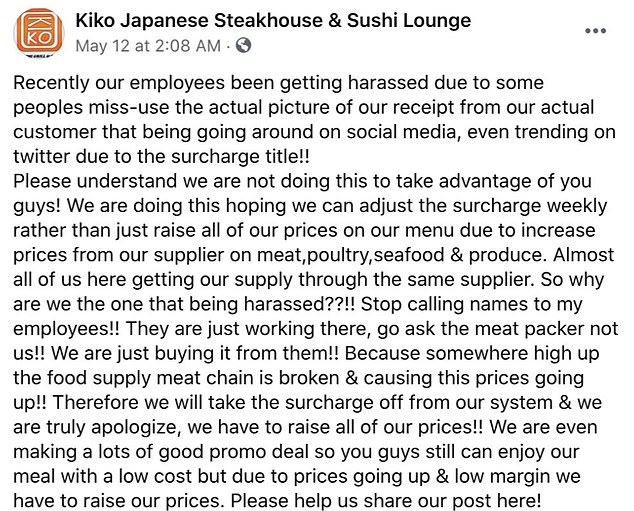 They added they were going to remove the surcharge and live with lower margins due to backlash.

And many British users said they too wouldn’t be pay a surcharge.

‘Another gimmick to pry money out of the customer’ one said. 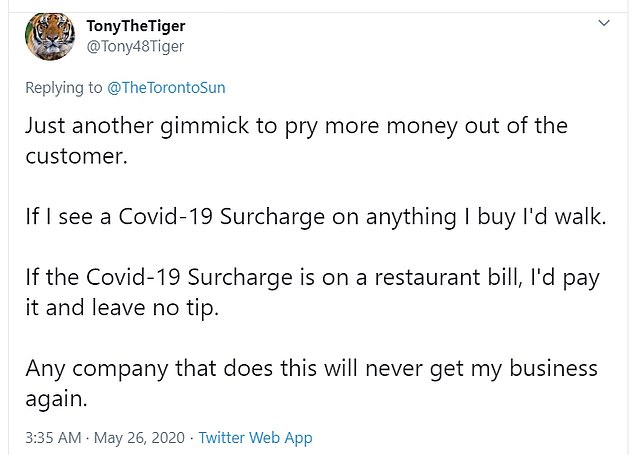 But others said they would be happy to pay the charge, as long as they were informed up front.

‘If it means all the lovely places that I miss dearly would be able to open and stay open financially I’d happily pay it whilst singing and dancing, thank you,’ one said.

‘God yes. Bring it on. Whatever helps restaurants survive this,’ added another.

‘Absolutely, worth every penny’ said another. 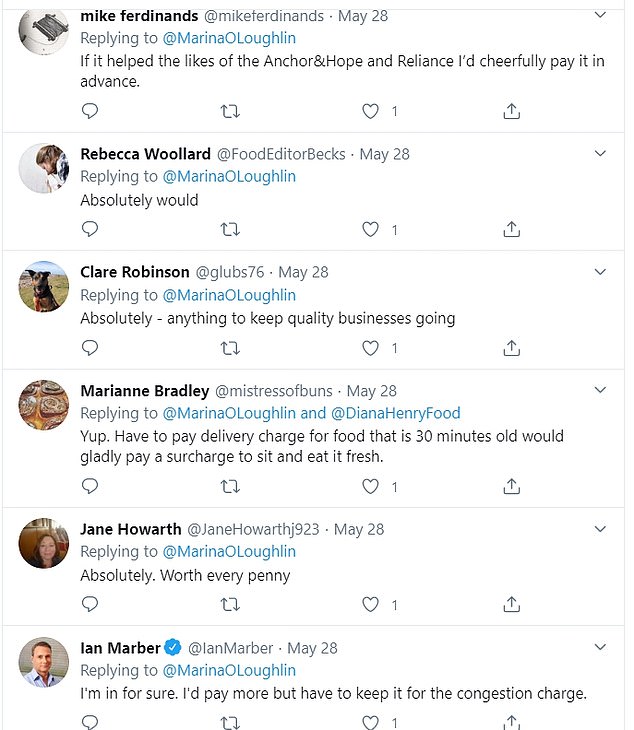 But others said they would be happy to pay the charge, as long as they were informed up front.

Despite apparent support for the idea on this side of the Atlantic, many restaurants in the States faced backlash for the charge.

Goog’s Pub & Grub in Missouri, told Fox 17 they are charging an extra $1 per meal.

They said the charge was a way for them to be transparent about the rising costs of food and PPE.

‘We’re just trying to pay the bills so we can stay open until this is over,’ owner Brad White said. 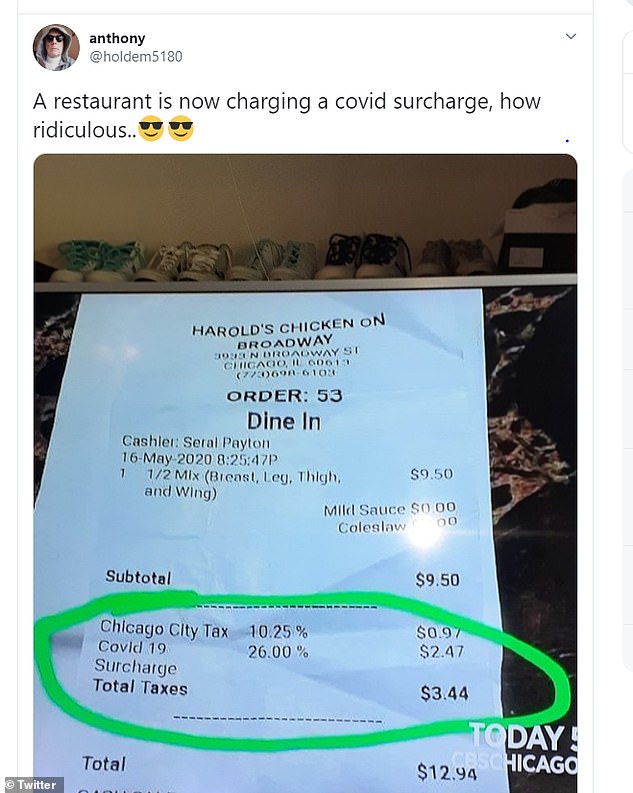 Harold’s Chicken in Chicago added a 26 per cent surcharge to their meals.

Harold’s Chicken in Chicago added a 26 per cent surcharge to their meals.

Restaurant manager Jacquelyn Santana told CBS their food suppliers raised their prices by the same amount due to the pandemic.

‘We’re trying to keep other employees employed, including myself. We are just opening up so we really need to be able to make ends meet,’ Santana said.

While restaurants in the US have remained open amid the pandemic, Boris Johnson ordered the shutdown of the hospitality industry in the UK on  March 20 and they have remained closed ever since with devastating effect to the restaurant industry.

Earlier this month it emerged that the hospitality industry has submitted a 75 page report setting out a roadmap to getting restaurants and pubs open on July 4, that includes ditching the hotel buffet and no more drinkers at the bar.

The dossier has been submitted to ministers by UKHospitality, the trade body for the industry.

It says that in pubs and restaurants, salt and pepper shakers will be removed from tables and instead brought to customers along with cutlery, instead of it being on the table when you sit down.

How to make itsu meatball at home