A breathalyser test being developed by British scientists could revolutionise cancer diagnosis.

The test is designed to pick up early signs of the disease which enter the breath and become airborne – slashing the need for biopsies.

Doctors say it could save thousands of lives each year.

The technique relies on a pioneering device that can detect chemicals given off by cancerous tumours.

A major trial of the technology – involving 1,500 patients over two years – is now being launched.

The test could replace current screening programmes within a decade. 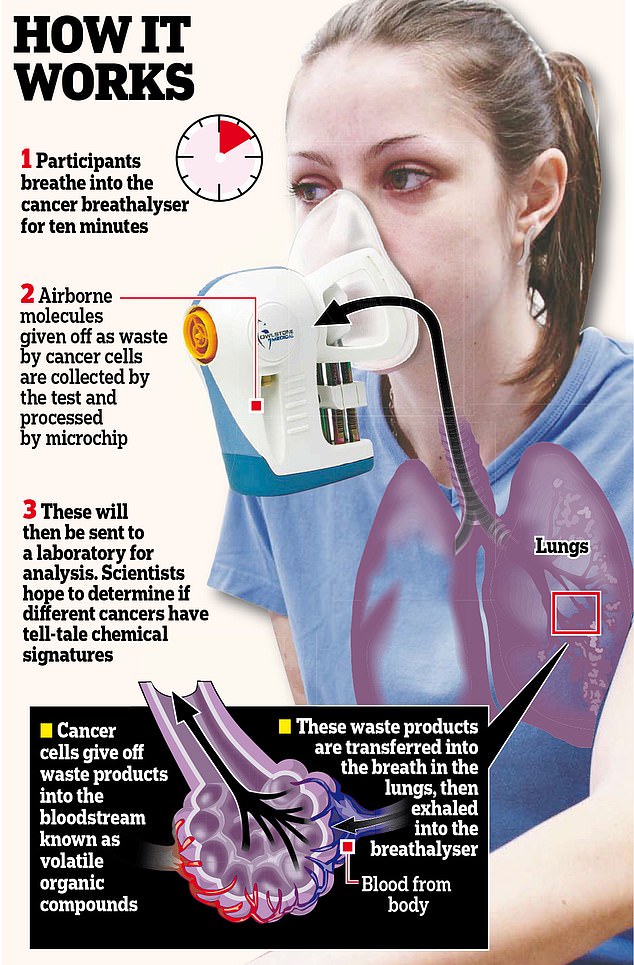 A major trial of the technolog (pictured) – involving 1,500 patients over two years – is now being launched

Dr David Crosby, from Cancer Research UK, said: ‘It sounds futuristic but it’s very much a real thing and the potential is enormous. If you find cancer early, the potential for treatment is much higher. In a lot of cases, we simply don’t have good tests for finding very early cancers because they don’t have symptoms.

‘So having a test which is relatively cheap – and non-invasive so you don’t have to take a biopsy – would be a huge advantage. Essentially it’s a breathalyser for cancer.’

The UK lags behind the rest of Europe when it comes to cancer survival rates, which experts blame on a failure to diagnose it earlier. More than 17,000 Britons die each year because the disease is not spotted quickly enough.

While biopsies or other invasive tests take time to organise, the breathalyser could be operated in a GP’s surgery.

The technology is the brainchild of Cambridge scientist Billy Boyle, who developed it after his wife died from colon cancer at the age of 36. Kate Gross – who had been an adviser to Tony Blair and Gordon Brown – died in 2014.

Mr Boyle said the loss of his ‘inspirational’ wife – with whom he had twin boys – spurred him to co-found development firm Owlstone Medical in the hope of helping others get early treatment.

The test works by spotting waste products given off by cancer cells, which are known as volatile organic compounds (VOCs). These find their way into a patient’s breath through the bloodstream, in a similar way to alcohol. 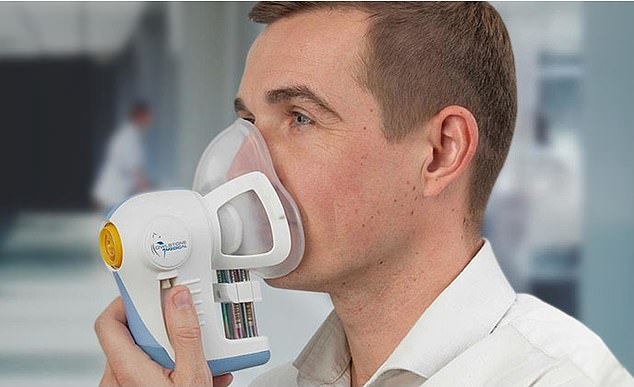 In the trial being carried out at Addenbrooke’s Hospital in Cambridge, patients will be asked to breathe into the device for ten minutes. It will collect the airborne molecules before they are sent to a laboratory for analysis.

Patients can expect to have their results within a few days, rather than the two weeks it typically takes for a biopsy.

Scientists also believe that different cancers will cause recognisable alterations in the VOCs, allowing them to determine the chemical signatures for each. Initially, patients with suspected oesophageal and stomach cancers will be given the test before it is extended to include prostate, kidney, bladder, liver and pancreatic cancers.

The trial is being run by Cancer Research UK alongside Owlstone Medical.

Dr Crosby added: ‘The concept is that if you look for those waste products, then you’ll be able to spot whether or not there’s a cancer and what sort it might be.

‘It’s early stages but there are lots of promising signals that look like you will get a different signature from a cancer in your gut than you would from one in your lung, pancreas or anywhere else.’

In the UK, there are 360,000 new cases of cancer diagnosed every year. Of these, half are detected at a late stage, drastically reducing a person’s survival chances.

However, rapid advances in technology mean scientists can now detect early signs of cancer that are equivalent to a fraction of a grain of sand.

Similarly, a greater understanding of the biology of cancer means researchers are now confident they know what to look for.

She said: ‘We urgently need to develop new tools – like this breath test – which could help to detect and diagnose cancer earlier, giving patients the best chance of surviving.

‘Through this trial we hope to find signatures needed to detect cancers earlier. It’s the crucial next step in developing this technology.’

Mr Boyle said that the breath test could work alongside other methods of diagnosis. He added: ‘There is increasing potential for breath-based tests to aid diagnosis, sitting alongside blood and urine tests in an effort to help doctors detect and treat disease.

‘The concept of providing a whole-body snapshot in a completely non-invasive way is very powerful and could reduce harm by sparing patients from more invasive tests that they don’t need.

‘Our technology has proven to be extremely effective at detecting VOCs in the breath, and we are proud to be working with Cancer Research UK as we look to apply it towards the incredibly important area of detecting early-stage disease in a range of cancers.’

Scientists discover a cell that can ‘put cancer tumours to sleep’

The ‘inspirational’ mother behind a cancer breathalyser