A cancer-surviving toddler who was born with an abnormally large tongue needs surgery to help him eat and talk.

Baker Roth, 16 months old, was born with Beckwith Wiedemann Syndrome (BWS), a rare overgrowth disorder which can affect all parts of the body.

The condition, which affects one in 14,000 births worldwide, meant his double-sized tongue could be spotted on pregnancy scans at 27 weeks.

Doctors and Baker’s parents Farrah and Sean, 42 and 41, from Jenks, Oklahoma, believed he was just being poking it out to be ‘cute’.

But after he was born by emergency C-section eight weeks early, doctors recognised he had the condition, causing his overgrown tongue, known as macroglossia, as well as many other problems.

Baker needed surgeries on his organs as well as five months of chemotherapy to remove a cancerous mass on his liver, which his family believe has amounted to almost $2million (£1.58m) in medical bills.

The toddler has been in remission since October, but now the family wish for their child to have a normal life, hoping to raise money for him to have tongue reduction surgery in the future. 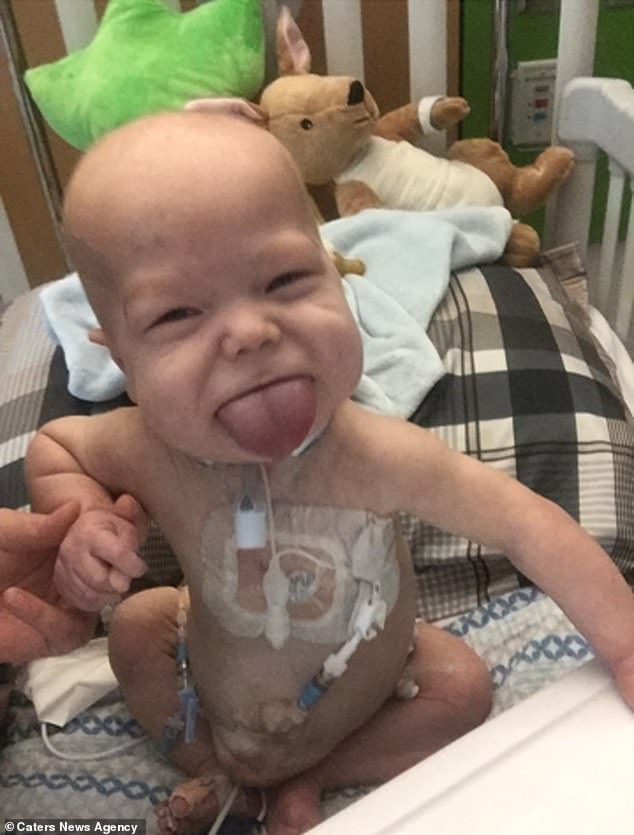 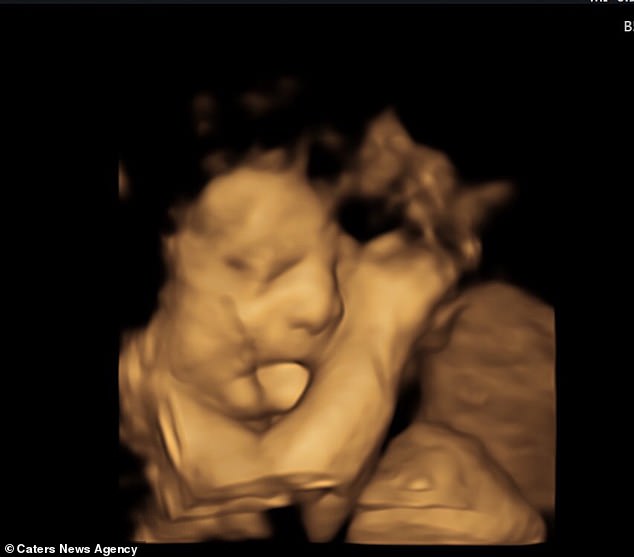 His double-sized tongue could be spotted on pregnancy scans at 27 weeks. Doctors and the parents Farrah and Sean, 42 and 41, believed he was just being poking it out to be ‘cute’

The operation will prevent his jaw from being deformed due to the strain from his overly wide tongue, also allowing him to eat more than pureed foods and talk for the first time.

Mother-of-four Mrs Roth said: ‘I always thought it was cute that he had his tongue sticking out in ultrasound scans, but realistically it was macroglossia caused by BWS.

‘Not a lot of doctors are familiar with the syndrome and we just thought it was adorable, I even posted about how cute it was.’

The symptoms of BWS vary among individuals, but could affect the tongue, the abdominal organs, the skin near the ears, kidneys and height.

‘After he was born one of the first thing the doctor said to my husband was “He has a really large tongue’, Mrs Roth said.

‘But there were no other signs of BWS apart from ear indentations in the lobes.

‘I would say his tongue is double the size it should be, it’s a lot thicker than it is long.

‘If he pulls his tongue into his mouth there is no room in there, so it’s constantly poking out and stays hanging over his bottom lip.’

Mr and Mrs Roth, who have been together since they were 15 years old, were shocked to find out they were pregnant, as Mrs Roth though she had a stomach virus for six weeks. 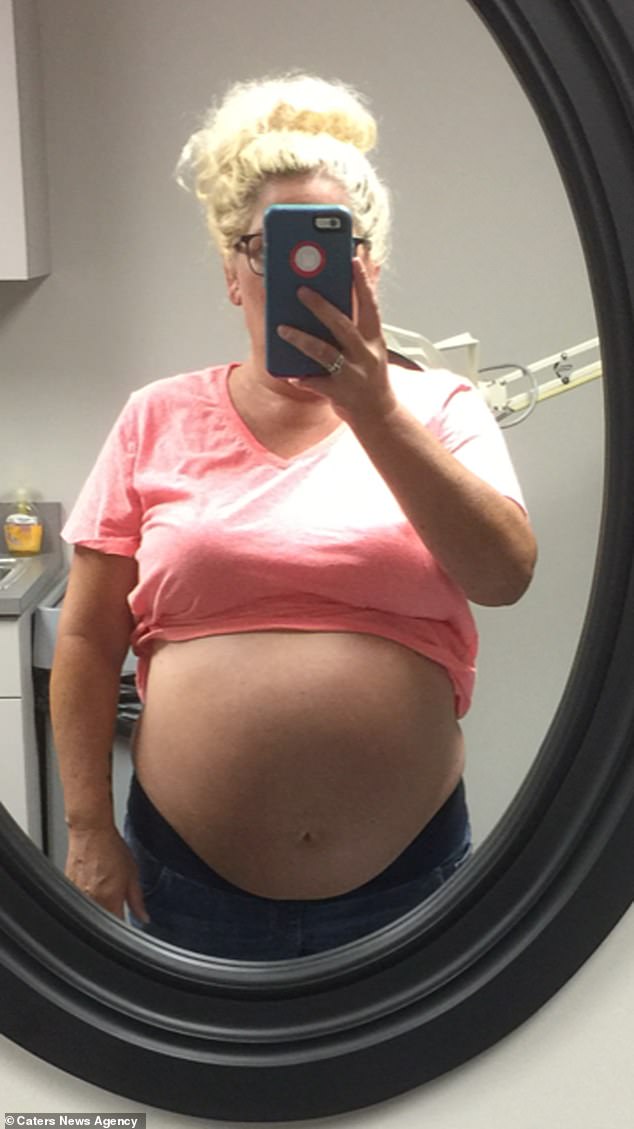 Mrs Roth was shocked to find out she was six-weeks pregnant, believing she had a virus 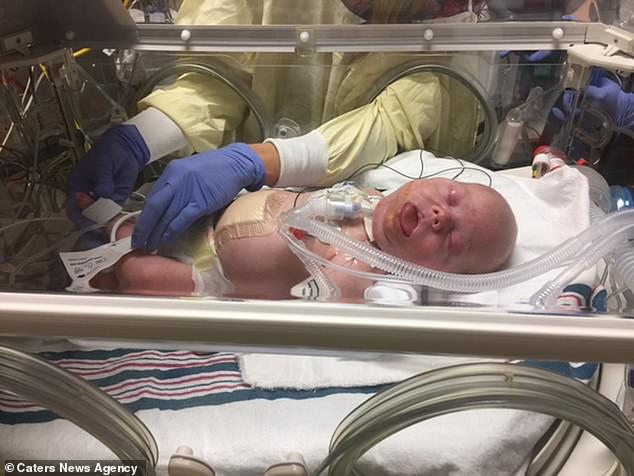 Baker was born at 32 weeks via C-section, weighing 7lb 14oz,when it was discovered he had BWS condition, which affects one in 13,700 births worldwide 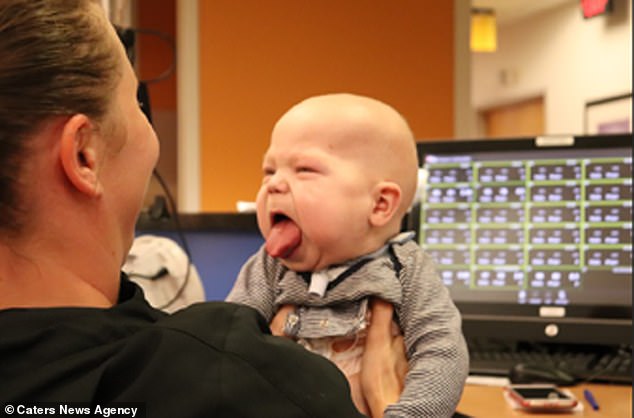 WHAT IS BECKWITH-WIEDEMANN SYNDROME?

Beckwith-Wiedemann syndrome is a congenital overgrowth disorder, which can affect all parts of the body.

BWS is a rare genetic condition, affecting around one in every 13,700 births worldwide.

The figure is likely to be higher in reality, with mild cases rarely diagnosed.

Typically a child born with BWS will have an enlarged tongue, which can causes breathing, feeding and speaking difficulties, as well as excessive dribbling. It can also cause respiratory problems and result in a protruding lower jaw.

Some children with this condition are born with an opening in the wall of the abdomen (an omphalocele) that allows the abdominal organs to protrude through the belly-button.

Children with the condition are also likely to suffer enlarged abdominal organs, overgrowth of one half of the body, liver tumours and an enlarged heart or heart defects.

Baker was born at 32 weeks, weighing 7lb 14oz, and needed three surgeries in the first week of his life.

Doctors needed to reinsert his kidney and intestines that grew outside his stomach.

He also needed a trach – a breathing tube – fitted within his first month due to obstruction and him holding his breath.

Mrs Roth said: ‘For some reason he kept holding his breath, not due to his long tongue.

‘When he didn’t like something, he would hold his breath until he passed out, at a month old it was decided he needed a trach.’

Children with BWS are at an increased risk of several types of tumours, developing in about 10 percent of people, according to the National Library of Medicine.

In July, one of his regular blood tests and scans would reveal a mass in his liver, called a hepatoblastoma.

The ultra-rare cancer that affects roughly one in 500,000 people required chemotherapy and surgery to remove part of the infected organ.

Mrs Roth said: ‘I was never afraid that he would die, I took it day by day and went into a different mental mode.

‘We were so relieved to find out that Baker was in remission, it was a heavy weight lifted from us, but unfortunately in the back of your head you always fear it can return.’

Mrs Roth added: ‘He’s a two-million-dollar baby, I haven’t been able to open the bills to look at anything yet, I’ve been anxiously waiting for the reduction.’ 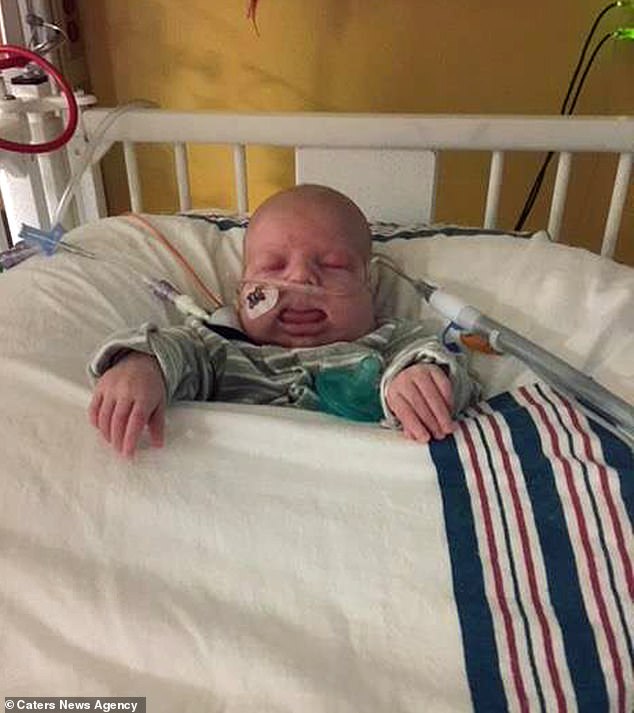 Baker’s family believe his medical bills have amunted to almost $2million, as he also needed five rounds of chemotherapy for a cancerous mass in his liver, called a hepatoblastoma 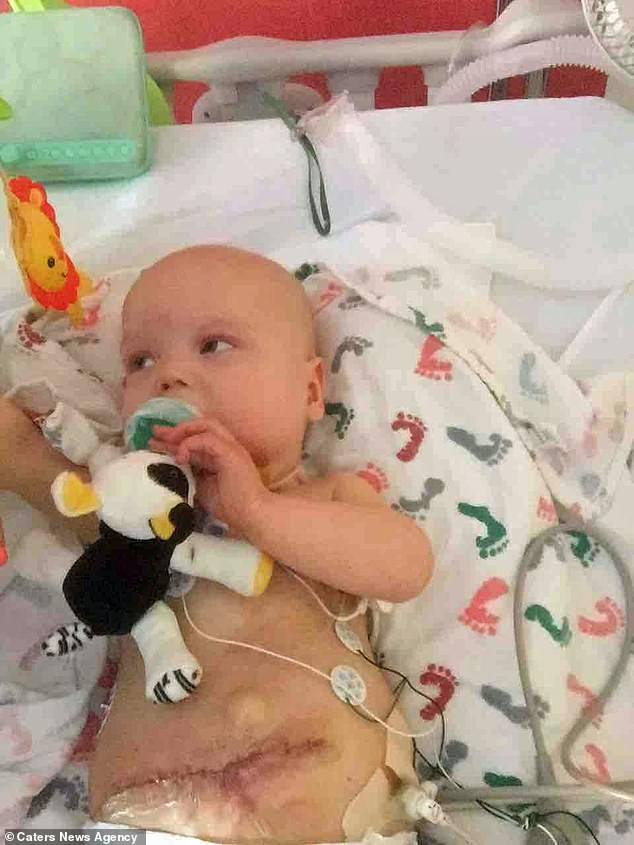 Doctors needed to operate on Baker three times in his first week. He needed his kidneys and intestines reinserted as they grew outside his stomach, causing a mass. He needed a trach fitted within his first month due to him holding his breath and passing out

‘Tongue reduction surgery will allow him to make sound and communicate, as well as being able to eat more.

‘He loves food and wants everything everyone else has so that will be the biggest thing, he will be so excited.

‘Until his lips can touch, he will not be able to speak, and currently the only way he can communicate is when he gets mad because he learned how to scream over his trach.’

While few people have seen him out in public, due to chemotherapy compromising his immune system, those who have notice his unusual tongue.

‘Most people just think it’s cute and don’t ask questions, so I just smile and thank them. His siblings get a little protective and his dad is the same way.

‘We call him our bubble baby as I’ve not been able to take him out a lot due to surgeries and chemo, I’m so scared of him getting sick.’

The couple described little Baker as a ‘surprise with some extras’.

Mrs Roth added: ‘It’s been a wild ride but thinking of everything Baker has been through is amazing, children are so resilient.

‘It will be exciting to explain to him where his scars came from when he gets older, BWS kids seem to be very happy and strong little fighters.’

Now the family are fixated on getting his tongue reduced so he can live an ordinary life, and are fundraising to cover the costs of his ever escalating medical bills following the surgeries and treatments to keep him alive.

Catastrophe star Rob Delaney says he is ‘sad, angry and heartbroken’ since losing his son Henry