Morrisons has unveiled its new food box and recipe kit designed to feed a family of four for £30.

The boxes, which cost £28.50 (a five per cent discount) if you sign up for a subscription, contain a mixture of cupboard staples and fresh produce to make five meals – coming in at £1.50 per portion.

Available across the UK with free delivery, they come with full retail-sized packs of ingredients, unlike rival trendy meal kit makers such as HelloFresh.

Its easy to follow recipe cards include family favourites such as spaghetti and meatballs, chilli con carne and a Veggie Curry. 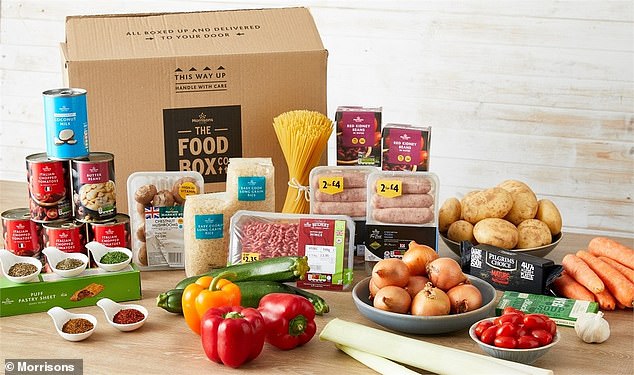 There are also a couple of hearty winter meals such as a cheesy leek and mushroom pie and a warming sausage and butterbean bake.

The supermarket says the tasty dishes take the ‘planning and hassle’ out of preparing family meals from scratch during the week, helping make mealtimes a more social, relaxed experience.

The offering is less than half the price of market leaders Hello Fresh, whose meals start at £3.25 per person; Gousto, costing from £2.98 per serving; and Mindful chef, priced at £6 per portion.

And the fact the Morrisons boxes come with full retail-sized packs of ingredients means customers are likely to have ingredients left over at the end of the week – which they can use to cook additional meals.

Tessa Callaghan, Head of Food Boxes at Morrisons, previously told FEMAIL: ‘Many of our customers enjoy eating meals as a family and we have seen customers do this more during the pandemic.

‘It can be difficult to constantly cook up new dishes that please everyone.

‘So, we wanted to create a great value box that contained high-quality produce and recipe cards – to make it easier to try new things.’ 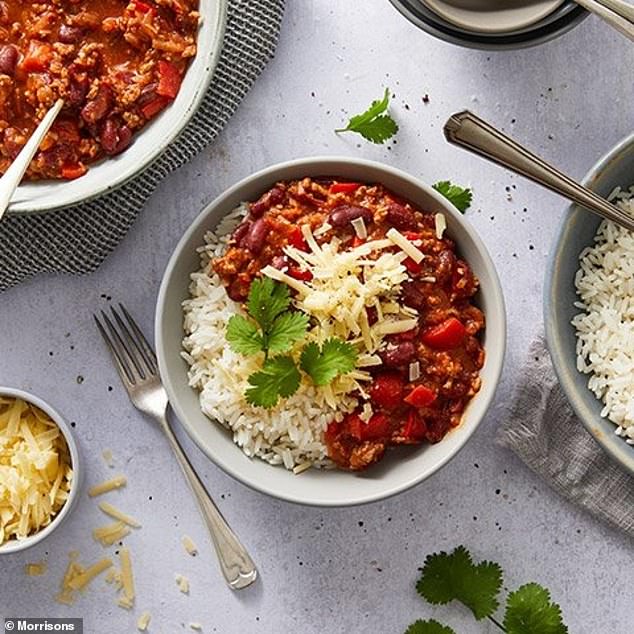 Its easy to follow recipe cards include family favourites such as spaghetti and meatballs, chilli con carne (pictured) and a Veggie Curry

Morrisons also has a range of additional ‘everyday’ boxes, including a sports nutrition box (£21), a cupboard essentials box (£20), a Veganuary option (£25), meat and vegetarian essentials boxes (both £35), a selection of fruit (£16), alcohol boxes and an ‘ultimate cleaning bundle’ priced at £35.

Earlier in the pandemic, Morrisons became the first supermarket to offer food past its ‘best before’ date for a hugely marked down price through app Too Good To Go – in a bid to prevent unsold food going to waste.

Customers who used the app were given boxes of food filled with unsold fruit and veg, bakery and deli items worth at least £10 for just £3.09.

2. Peel and finely slice the onion, crush the garlic clove and slice the red pepper into small chunks.

3. Heat a tablespoon of oil in a large saucepan over medium heat. Add the onion and garlic and gently fry until the onion is soft.

4. Add the beef and gently fry until the meat starts to brown then add the chilli powder. Stir the spices into the meat so it’s well coated then add the red pepper. Stir and allow to cook for a few minutes.

5. Stir in the tinned tomatoes and the stock and simmer for 25 – 30 minutes. Stirring occasionally.

6. Cook the rice according to the package directions.

7. Drain and rinse the kidney beans and stir them into the chilli for the last 5 minutes of cooking.

8. When the chilli and rice is ready serve together with grated cheese and coriander leaves. If you have any plain yoghurt in the fridge feel free to dollop a little over the top of the chilli.