A chef has shared his tips for creating the ultimate pasta dish.

London-born Andrew Macleod, 27, who runs Emilia’s Crafted Pasta, said there is a ‘science’ behind whipping up the perfect plate – including serving the pasta al dente and using maths to work out the best sauce and pasta pairing.

‘There’s a science behind it, if you pick short, long, rigged, pasta – it changes the taste’ he said. ‘Somebody along the path has really figured this out, and there’s a lot of similar techniques for why sauces are made are as good as they can be.’

Here, he shares some of his tips with Femail… 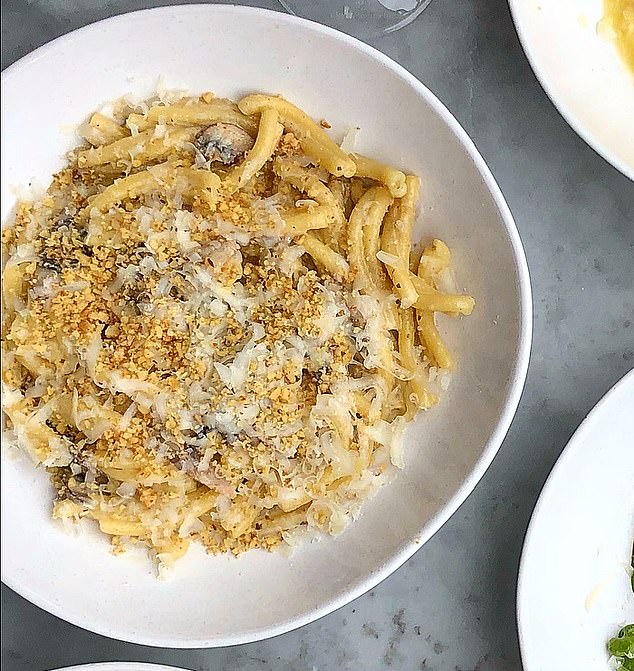 London-born Andrew Macleod, 27, who runs Emilia’s Crafted Pasta, said there is a ‘science’ behind whipping up the perfect plate. He advised against serving chicken with pasta

‘Our investors insisted on putting a chicken dish on the menu,’ Andrew explained.

ADD PASTA WATER TO THE SAUCE

‘You’re getting starch and saltiness in that water – if you mix a bit into the sauce – you get a uniform taste throughout the whole dish.’

‘They said that Brits love chicken, and Nando’s is so popular, but I insisted that we shouldn’t.

‘Not pairing chicken and pasta is something that’s passed down through the generations of Italians’.

Andrew explained that the pasta shell, should always be cooked with the sauce, meaning that if you add chicken to the mix the meat is boiled which is the ‘worst way to cook chicken’.

‘Chicken Milanese with spaghetti is allowed,’ he adds. ‘That works well – because you don’t mix the two together.’ 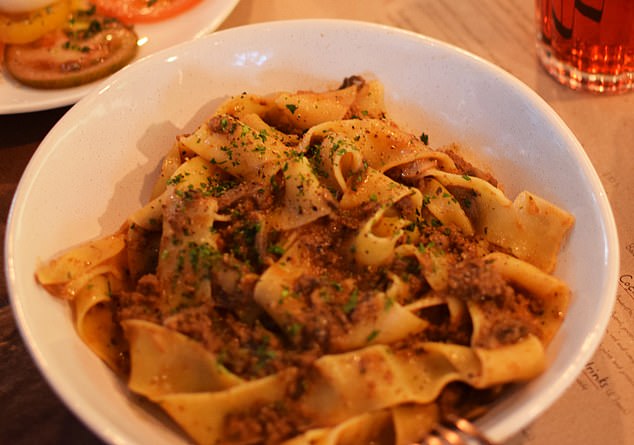 Andrew explained that for a hearty sauce, such as a Ragu, bolognese or other tomato based sauces, you need a wide flat pasta, such a pappardelle

Andrew explained that for a hearty sauce, such as a Ragu, bolognese or other tomato based sauces, you need a wide flat pasta, such a pappardelle.

‘I like that wideness because it capture a hearty sauce. The sauce will cover the entire pasta and pieces of mince will stick to it –  so you need something egg-based, wide, and long with a hearty sauce, like ragu with lots of vegetables.

FOR TOMATO SAUCE AND OLIVE OIL

Andrew said: ‘Bucantini – which is like a thick spaghetti – is not going to match well with a hearty sauce as that’s not going to get into the middle of the shape. You need a very simple sauce – olive oil or tomato.’

‘You get lovely silky smooth golden ribbons work well with the sauce.’

DON’T PICK A PENNE FOR PESTO

With pesto, you need a shape such as casarecce, a small fresh pasta, shaped alike to a figure of eight.

‘When you buy pesto in the UK, even in a good jar it’s very oily with a lot of basil’ Andrew added.

‘But the traditional way to make it is creamy and filled to the brim with cheese, Parmesan and pecorino, but because those are expensive in the UK, they’re often kept to a minimum.

‘Pair homemade pesto with casraecece, and it can nestle right into those dishes – none left on the bottom anywhere else – perfectly creamy so no oil on the side. 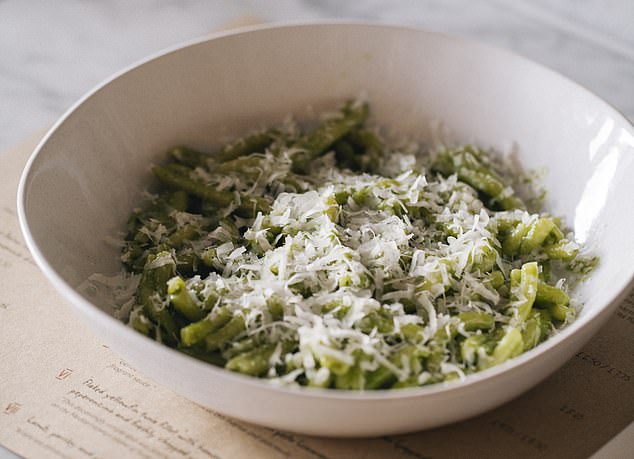 With pesto, you need a shape such as casarecce, a small fresh pasta, shaped alike to a figure of eight. Stock image

‘Al Dente is an interesting one’ Andrew said. ‘It mean “to the tooth”.’

‘It makes pasta a lot easier to digest, because the more you cook the more the starch granules break down.

‘The water goes cloudy because of the starch coming out, so al dente is better for taste and digestion.’ 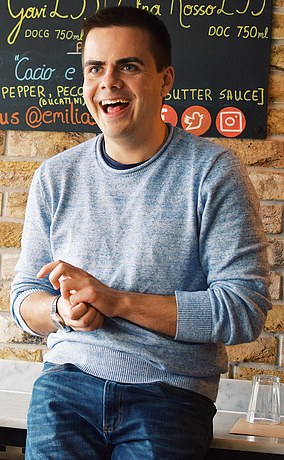 Andrew, who grew up in west London with British parents, might be the last person you expect to open up a pasta restaurant.

But after university, where he graduated with a maths degree, he decided to travel to Italy, where he went to the Emilia region, which he eventually named his two London restaurants after.

‘When I was little I was always quite picky’ Andrew told Femail. ‘My mum makes a lot of stuff from scratch:  dough, pasta, cottage cheese – so I always had an interest in food.

When Andrew got to University, he used his maths skills to set up a poker events business and run high stakes games.

‘I was studying maths and I was thinking what am I gonna do with my life, for the time being it wasn’t going to be anything significant, I decided to take a gap year after university  and that’s was the start of this whole pasta thing.

‘As a kid, I always wondered why there was nothing dedicated to pasta – so many pizza and burger restaurants, it was almost quite troubling.

‘Coming to a more mature age, I think people’s perceptions with pasta is they eat it at home, always a staple, people didn’t want use to the concept of eating pasta in a restaurant.

‘This is one of the fundamental things I want to break down. This is why they need to come and get something that cannot be replicated at home’ he added.

‘In my gap year,  I went to Italy – mostly the Armeno region – I’m not Italian – but I wanted to learn anything and everything.

‘I travelled to and from and was just doing everything from couch surfing to hostels to hotels to try and understand the culture more and understand about how the pairing of pasta and sauce works.

Returning back to the UK, he was keen to open his own restaurant, and sought out investors.