The real reason behind why we get stitches when we exercise has been revealed – and it is nothing to do with being unfit as 20 per cent of professional runners suffer them.

The first theory is that the body hasn’t got enough blood pumping through it during intense exercise and the second is that the bouncing of the body cause strain on ligaments ‘holding everything together’. 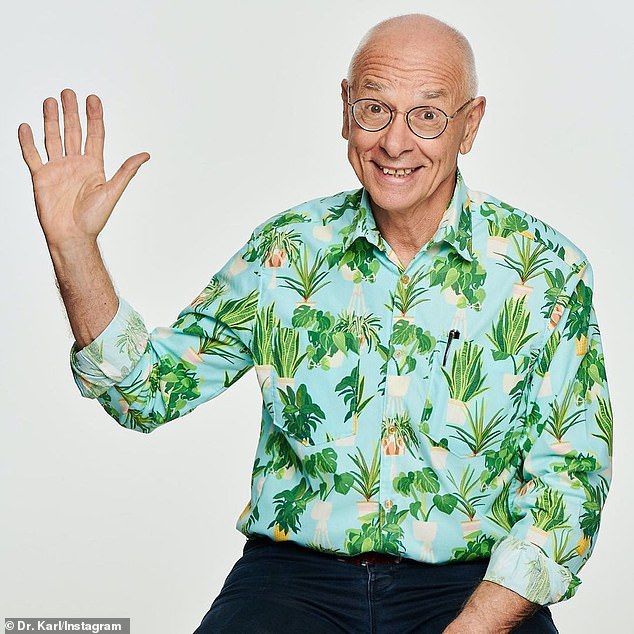 The third is that the slippery lining of the gut is being irritated by the organs as they move around.

Dr Karl carefully explained the three theories and why two of them don’t quite fit the bill.

Theory number one – a lack of blood.

The much-loved scientist said that this theory sprung up because  of the idea that when you are running you are not getting enough blood into your diaphragm muscles.

‘So your lungs go up and down and therefore it begins to hurt, and it is what they call an angina,’ he said.

The only problem is you can get stitches when doing activities that don’t involve heavy breathing – for example camel or bike riding.

So the second theory was born.

The visceral ligaments help to keep your gut, which starts below the lungs and finishes at the top of the legs, contained and in its place. 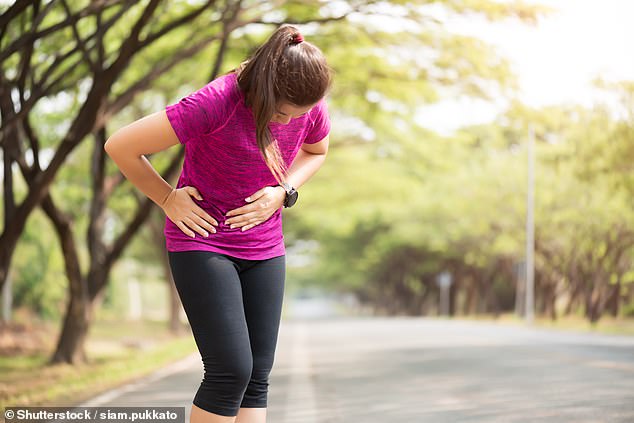 What is a stitch?

A stitch, or ETAP (exercise related transient pain) is an uncomfortable pain many people feel during exercise.

It is still not known why we get stitches but the latest theory suggests it is due to irritation of the parietal peritoneum, which is the slippery lining of the gut cavity.

Stitches can effect anyone, even professionals, up to 20 per cent of professional runners still experience them.

Scientists aren’t sure why this is.

‘In theory when you are pulling on these back and forwards you do get some irritation hence the stitch or the exercise related transient abdominal pain,’ Dr Karl said.

This would account for pain in running and also with activities like motorbike riding. But there are still problems with the theory – because swimmers get stitches too, but their body isn’t being bounced around.

So this leads the current idea.

Theory three – the irritation of the parietal peritoneum.

The parietal peritoneum is the slippery lining of the gut cavity, which runs from the bottom of the lungs to the top of the legs.

This membrane is smooth and slippery ‘so all your ten metres of gut and everything else can sort of slip around and slide inside it,’ Dr Karl explained.

‘And if a stomach is really full it can press on this peritoneum and irritate it in two different ways, of course the extra physical pressure plus when you have had a big meal your stomach will suck water out of anything that’s around and that will also dry things out,’ he said.

This current theory leads to solutions – or ideas on how to prevent stitches from occurring, Dr Karl said.

Avoiding exercise for two hours after a heavy meal can help reduce the risk of getting a stitch, as can avoiding highly sweetened drinks.

Dr Karl also recommends drinking ‘those isotonic drinks which have 6% carbohydrates’ during exercise.

The scientist loves answering people’s science-based questions and did a feature on TikTok recently about alcohol.

Drinking alcohol or being slightly drunk can make the opposite sex more attractive, he said.

His latest query is why people suddenly become more attractive when you’re drunk. 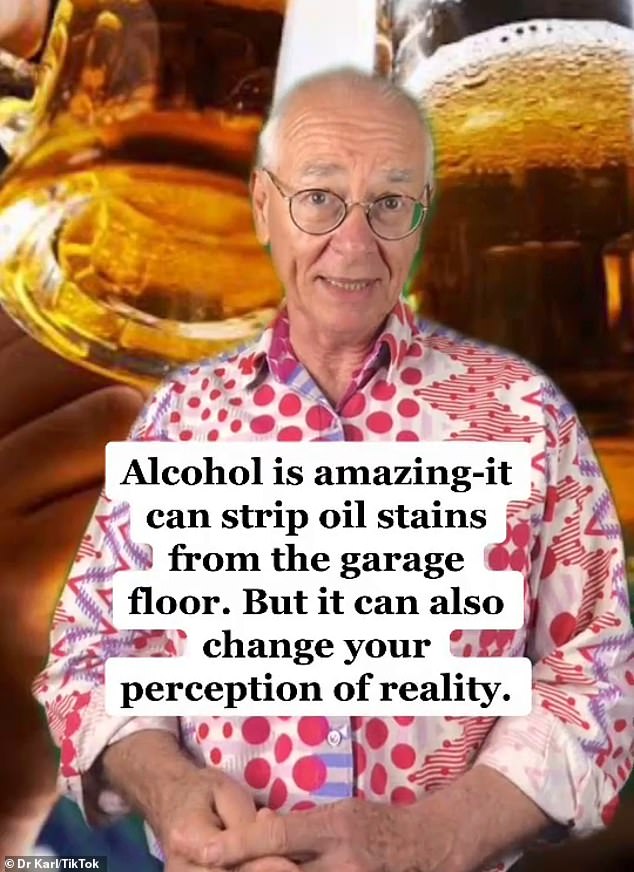 Drinking alcohol or being slightly drunk can make the opposite sex more attractive, one of Australia’s leading science commentators has revealed (Dr Karl pictured) 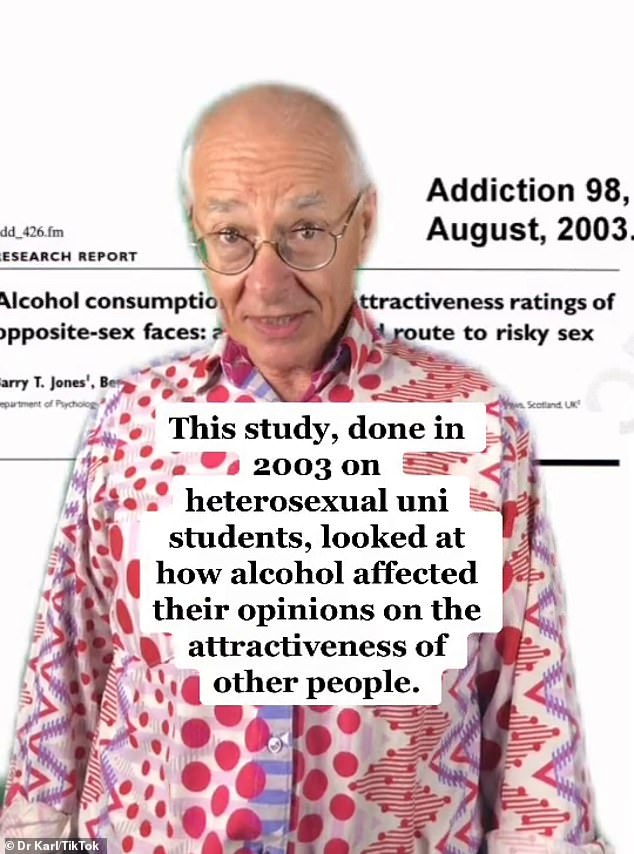 ‘It can strip oil stains off a garage floor, but it can also change your human perception of reality.’

The scientist highlighted a study done in 2003 on heterosexual university students and whether alcohol affected their perceptions of reality and their opinions on the attractiveness of other people.

‘For both men and women, when they were slightly inebriated or “Molly the monk”, a bit of alcohol made a wrist watch look a bit more attractive,’ Dr Karl said.

He said they called this an increase in the ‘Facial Attractiveness Index’, or what we might call ‘beer goggles’. 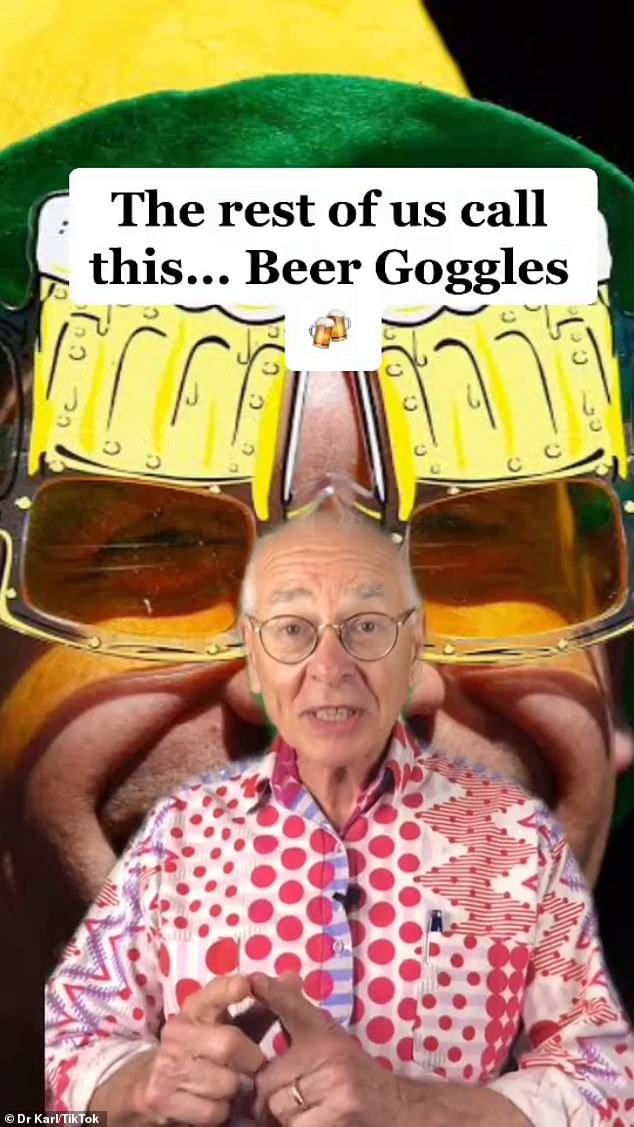 Dr Karl (pictured) said while scientists call this an increase in the ‘Facial Attractiveness Index’, we call it ‘beer goggles’

More than 25,000 people who saw the clip said it was ‘interesting’ and they ‘never knew it’.

‘At least 20 per cent of the population was conceived because of beer goggles,’ one commenter wrote. 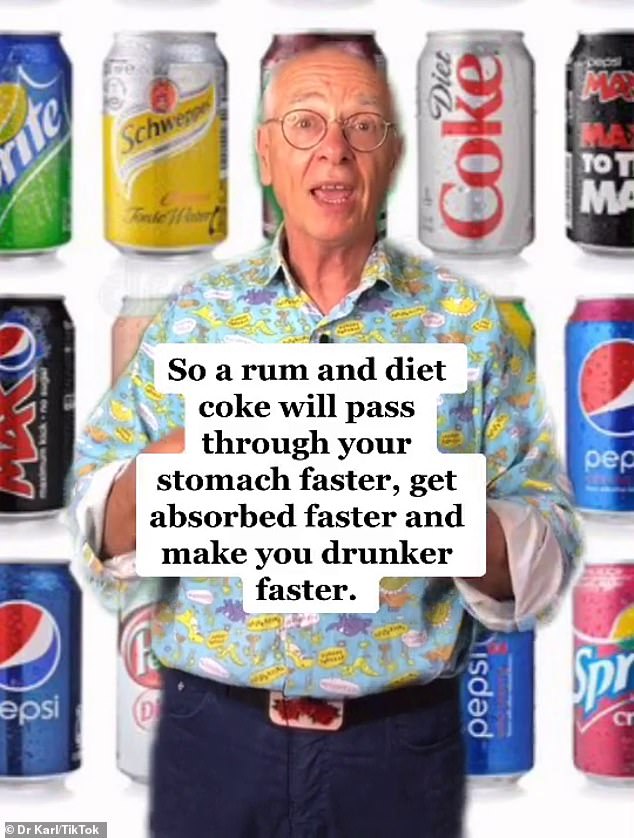 Recent queries include why does urine go clear when you’re drinking and does mixing diet drinks with alcohol make you more drunk.

Why does urine turn clear when you drink alcohol?

Recently, Dr Karl answered why your urine turns clear when you drink alcohol.

The reason why this happens is because the alcohol ‘acts on the anterior pituitary and interferes with your anti-diuretic hormone’.

‘Therefore, you start making huge amounts of urine and your pee is very light-coloured because it’s diluted,’ Dr Karl said.

Does mixing diet drinks with alcohol make you more drunk?

Finally, Dr Karl revealed that mixing diet drinks with alcohol can make you feel more drunk due to the digestive process.

His theory is that having alcohol with either diet or regular fizzy has the same amount of liquid alcohol but because our stomachs digest two to three calories a minute, the diet mixed drink would process faster.

‘Your stomach expels the liquid at a fixed rate of around two-to-three calories a minute,’ Dr Karl said.

‘So a rum and diet coke will get out of your stomach, into the next section, where it gets absorbed faster, and the blood alcohol level will go up higher and it will do it sooner than a rum and regular coke.’

The scientist recommends that you never drink on an empty stomach, and if possible choose full-fat mixer to prevent yourself from feeling too drunk.