With healthy eating on many Brits’ agendas for the New Year, for some it may have reignited their passion for cooking.

But even for the most accomplished home cooks, perfecting a pie can be a challenging task.

One person who has mastered the art is French-born pastry chef Dominique Ansel.

The cooking connoisseur, 41, was named the World’s Best Pastry Chef in 2017 at the World’s 50 Best Restaurants awards – the youngest ever person to be bestowed with the accolade.

In 2017, he famously invented the ‘Cronut’  – a hybrid of a croissant and doughnut – at his home in New York. It sparked a global frenzy and he now has bakeries in London, New York and LA.

Here, speaking exclusively to FEMAIL, Dominique reveals his top tips on how to nail the perfect pie. 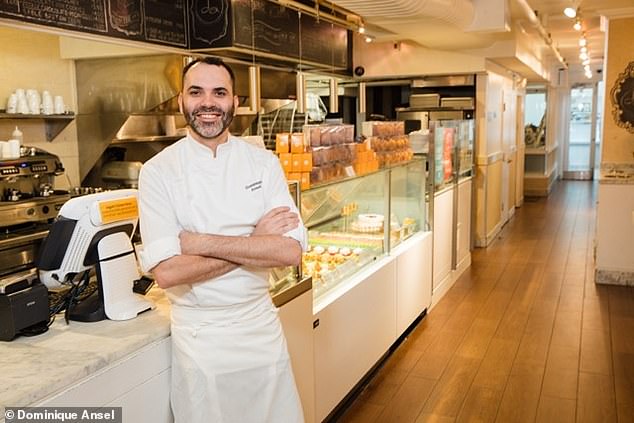 Dominique Ansel, 41, was named the World’s Best Pastry Chef in 2017 at the World’s 50 Best Restaurant awards, making him the youngest ever person to win the accolade

IT’S ALL ABOUT THE CRUST

For beginners who are just starting out in pie-making, getting the crust right is key according to Dominique.

He said: ‘Once you base yourself with a proper crust, one with a texture that’s flaky and light but still holds up the filling, it can be a canvas for so many different flavours and fillings, whether they’re savoury or sweet.

‘For us, the simplest is a classic butter crust (like in our salted caramel apple pie) or a vanilla sablé crust (in our bourbon pecan pie – and also the same dough that’s used for all our tarts as well).

KEEP AN EYE ON THE DOUGH

Dominque added that the most common mistakes are often made while making the dough.

‘Often it’s the crust that’s the toughest part to master, and I find that the temperature and texture of the dough is something you have to keep a close eye on,’ he said.

‘If you’re rolling out the dough and it gets too soft, pop it back into the fridge or even the freezer quickly until it’s cold enough to work with again.

‘If your kitchen is too hot and your kitchen counters warm up, you can also lay out a sheet tray with ice cubes to cool down the surface.’ 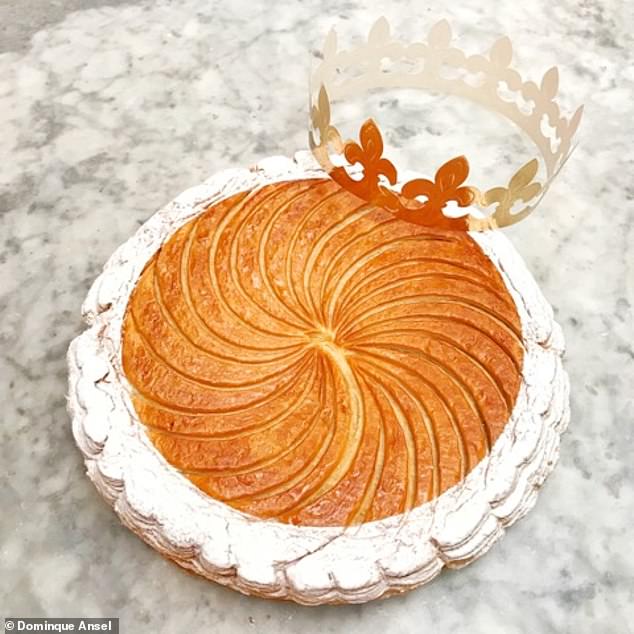 Pictured is one of Dominque’s creations, the Chef’s Galette de Rois (or King’s Cake) – the French traditional pie/galette used to celebrate the Epiphany

Another common mistake made by home cooks is over-working the pie dough.

Dominque said his favourite pie to eat is his own Extra Silky Pumpkin Pie.

He added: ‘It’s hard to pick just one, but I do love our Extra Silky Pumpkin Pie that we make each year for Thanksgiving.

‘It’s triple-strained so the texture of the pumpkin filling is smooth and custard-like, and it’s set in a gingerbread crust with vanilla Chantilly on top.

‘I didn’t grow up eating pumpkin pie or even knowing what it was; it wasn’t until I moved to New York to work at Daniel [a Michelin starred restaurant in New York] that I learned about it and how it reminds so many people of childhood/family memories (in France, pumpkin is usually something savoury).

‘Now every Thanksgiving, I still go back to Daniel each year to celebrate with my first family and home in the US.’

‘If you’re making a traditional short crust, over-mixing and overworking the dough causes the crumbs of butter to get smaller and smaller, while also warming the butter at the same time, which will result in a dense crust that doesn’t have that flaky tender texture.

‘Over-mixing also activates the gluten development more than it needs to, and can cause the final crust to be tough and dense.’

Dominique continued: ‘If you’re making a traditional pie crust or a sablé tart shell/crust, which include just a few simple ingredients, I’d recommend making it on your own.

‘The flavours and textures are just going to be much better if it’s made by hand as opposed to a store-bought crust (which often has preservatives to have a longer shelf-life).

‘However, for home cooks, if a recipe calls for puff pastry or filo/phyllo, you’re better off buying those from the market, as they’re quite labour-intensive and tricky for most people to make from scratch at home.’

Dominque added that he loves to experiment with sweet and savoury flavours, and each year he collaborates with top chefs to put on a series of ‘pie nights’ where they work together to create their own dishes.

‘What’s so fun about our Pie Nights is that each year, we’re able to create new savoury and sweet pies, so the menus are always different each year in each city. 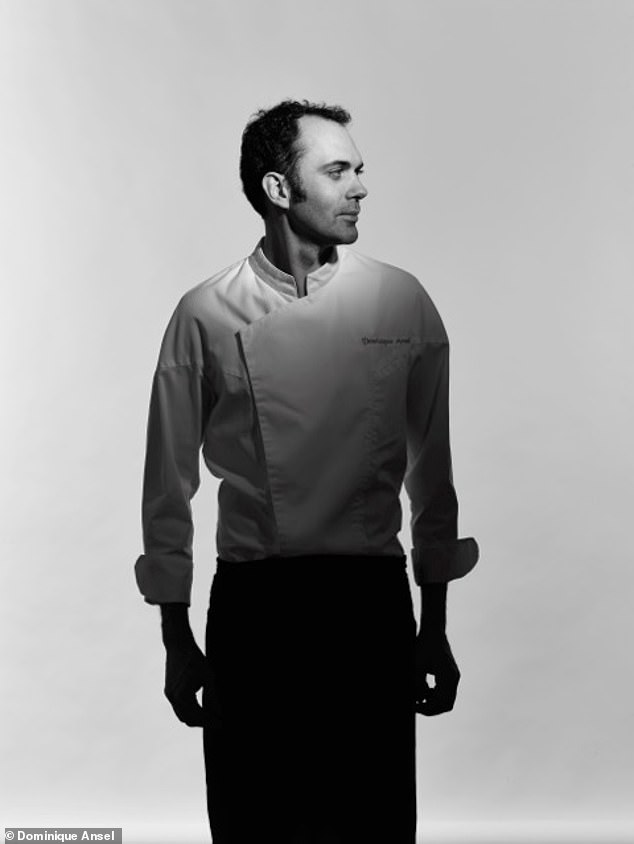 ‘This year, some of London’s best chefs shared their pie recipes with us too, like Claire Ptak (who baked the wedding cake for Prince Harry and Meghan Markle), Helen Goh, Brett Graham, Barragán Mohacho and Alex Dilling.

‘But no matter what, we’ll always have a classic Salted Caramel Apple Pie on the line-up – it’s a tradition.

‘Ours is filled with caramelised Gala apples and salted caramel in a flaky golden crust.

‘There’s something so simple and comforting about an apple pie, and for us, it’s always a welcome sign that autumn and pie season is here, and the holidays are right around the corner.’

DON’T BE AFRAID TO GET ADVENTUROUS

The chef also told Femail that those who are more advanced at pie making should try experimenting with flavours.

‘As you become more advanced and want to experiment with different flavour combinations, the crust and the finishings are elements you can easily change up,’ he said.

‘For example, a traditional pumpkin pie can be framed in a gingerbread crust instead of a basic pie crust, as we do for Thanksgiving.

‘A simple silky chocolate cream pie can be set in a chocolate sablé shell or even a speculoos crust, then topped with dark, milk, and white chocolate shavings.’

Pregnancy and diabetes: Things to keep in mind if you high blood sugar and plan to have a baby